The airship reaches Trick Tower, the Phase Three site, which is a tall featureless pillar built on an equally high platform. The candidates are told that to pass Phase 3, they have to climb down from the top to the base of the tower. An experienced rock climber candidate tries to climb down but is eaten by some flying monsters. Later, Kurapika finds that more than half of the candidates have discovered hidden doors to go inside the tower, which Gon finds one as well. However, the catch is that there are many hidden doors, each one can be only used once and only one person can fit through a door, which means they have to split up. When they try out different doors, they realize that they end up in the same room. In the room, Gon’s group are given instructions and special wristwatches for five of them to follow the majority, but they cannot proceed without a fifth member. Lippo, one of the Phase 3 examiners tells them this while explaining they have chosen the path of majority rule. 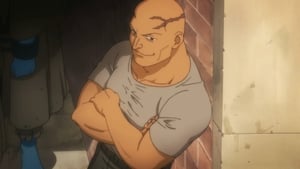