While following Satotz, a fog moves into the swamp and most of the participants are either rendered unconscious or killed by traps and verocious beasts. A group of candidates target Hisoka as they feel he’s a threat. Gon and Killua are separated from Leorio and Kurapika and both sides are eventually attacked by monsters. Leorio and Kurapika encounter Hisoka about to be attacked by candidates but are shocked to watch the magician easily take the candidates down. Hisoka then targets Leorio and Kurapika, but realizing that they are no match for him, they decide to head in different directions to stop him from following. However, Leorio returns, unable to run away from a fight. As expected, Leorio is beaten badly by Hisoka. Before the melee can get any worse, Gon, who is separated from Killua, arrives to stop Hisoka. Although he is also no match for Hisoka, he manages to hit his face once before being strangled by Hisoka. 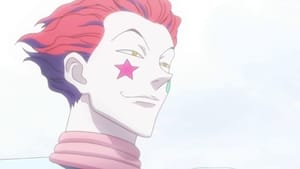